The vision for Vilicus Farms started when Doug, whose family’s grain farm in Ohio had been lost in farm crisis of the 1980’s, began looking for a viable way to return to farming. Without the existence of a traditional family farm base, options were limited. In 2005, Doug and Anna recognized the emerging opportunities in the organic market and so drafted their vision of a model organic farm that would push the boundaries of conservation and sustainability.

With a "vision board" in their Helena kitchen to guide them, Anna and Doug searched for farmland in earnest. While driving hundreds of miles between potential sites, they settled on the name Vilicus Farms-latin for “Steward of the Land”-before they finally found the 1,280 acres that would become the initial landbase for their farm. In 2009, they closed on land 35 miles North of Havre, MT - just south of the Canadian border.

Determined to participate in an organic agriculture revolution, Doug and Anna jumped into the role of beginning farmers at the age of 40. Before they had even made an offer on land, they purchased their first tractor-“Maddie”-with part of Anna’s retirement fund. “Maddie” broke ground in the spring of 2009, and using the USDA’s Beginning Farmer loan resources for land, equipment purchase, and operating capital, Vilicus Farms was born.

While both working full-time—Anna as the Lead of Sustainable Operations in the National Forest Service, and Doug as the Organic Certification program Manager at the Montana State Department of Agriculture—they did their farming on the weekends. Much of the farms first seasons were spent commuting 10 hours each weekend from their home in Helena, with their 3 Jack Russells in tow.

Since 2009, Vilicus has seen a full cycle of its crop rotation, and grown from 1,280 to 9,600 acres. Doug and Anna have created an organic farming apprenticeship program to mentor beginning farmers through the challenges of starting a large-scale, dryland, organic farming operation. Doug and Anna are no longer commuting from Helena every weekend; instead the farm crew is based out of the Vilicus Farms Headquarters located near the original 1,280 acres, which is the epicenter of the farming operation.

Doug and Anna are visionaries, dedicated to the ideals of organic agriculture and determined to equip others who dream of becoming farmers to succeed. 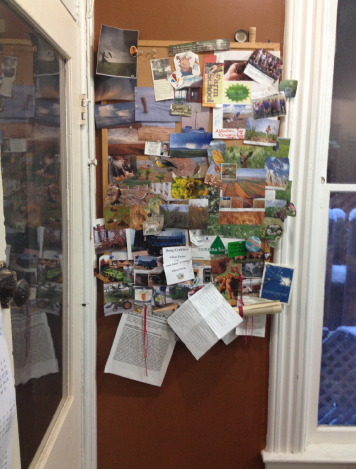 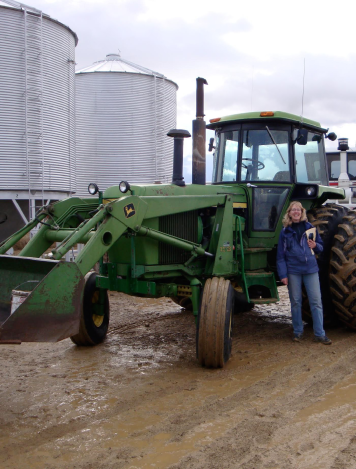 "A systems thinker and builder of alliances that can’t be ignored..."

I was born in Colorado Springs, Co. The arid climate, blue skies and sun defined me. My parents had moved from the midwest in the mid-60’s, from Indiana and Illinois. Colorado was a new frontier to them. They had 12 acres outside of CO springs. My dad invested stock in a thermal solar company in the 1970’s. My family was already thinking about sustainability- I recall he brought coffee grounds home from his work at Hewlett Packard to start composting and building soil for the garden on the granite soils. They also had a vision of building a passive solar house. That never came to fruition but it was a big part of my growing up. I walked to elementary school until 3rd grade and would pick up beetles in my yellow Snoopy lunchbox on the walk up our mile long driveway. We lived in the rural area, and Mt Blodgett was always in my background. Fast forward several years, and we had moved to WA state to be at a lower elevation for my brother, who had a heart condition he was born with. Dad took a transfer with HP to find better conditions for our family. The Pacific Northwest was beautiful to me, but I missed the sun.

After finishing highschool, I went to Purdue in pursuit of an engineering degree. I met my farmer (Doug) in 1989. I stuck around to get a MS engineering degree while my farmer was finishing his degree. I then took a job back in the sun in Western Colorado with the Forest Service. My MS work has been on on how to include the environment in construction projects. I continued with my desire for better environmental alignment and was able to pursue a Phd in Civil Engineering with a specialty in Sustainable Systems. Afterwards I got a promotion to be the Forest Engineer Staff Officer on the Bighorn National Forest in WY. Doug was at South Dakota State Univeristy getting his MS degree so Wyoming was closer than Colorado. Finally, after years of working and schooling, we moved to MT and lived in Helena for several years.

We ended up in Havre because that was where the farm opportunity existed. We had tried over the years multiple farm link options but to no avail. My support and dedication to our farm vision was about the ability to implement, model, live sustainability in a way that could make a difference. I was a Donella Meadows Fellow with the Sustainability Institute - that’s now the sustainable leaders network. That experience and network supported me in working with Doug to launch our farm vision into reality.

There is such a gap between most humans and the natural systems of this beautiful planet that sustains us. Agriculture is a way to close that gap. I’m passionate about how to bring the next generation to this work in way that collaborates with nature. The only way we are going to thrive on this planet is to work on our relationship with nature. Farming and agriculture is the best way to do that. Life is about reciprocity; there is give and take and complexity. How we foster more learning, curiosity and care for each other in this reality is the big question that sustainable and regenerative farming tries to answer. One result of this is good food, and I love to cook and have people eat together - especially when we have the story of the food and where it came from embedded in each of us. 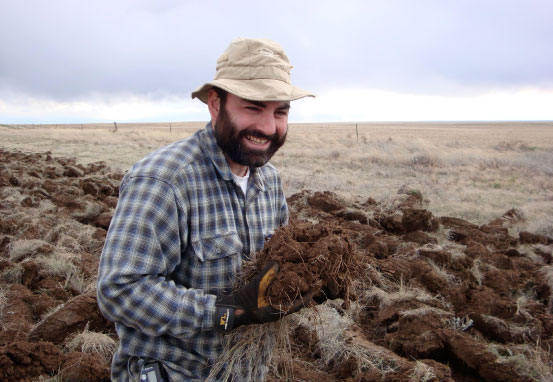 I was born and raised on my family’s farm near Urbana, Ohio. Coming to northern Hill County, Montana was the culmination of a 20-year quest to find the right combination of available land and market opportunities to make farming at scale a reality. The initial attraction to this place was largely economic but I have come to feel part of the land and ecosystem here. It now feels like where I belong, in a word, home. I do not feel that I have chosen agriculture as a career, rather, I feel that I am a farmer. It is what I am, not only what I do. I cannot remember one moment of my life when I considered being anything else. Even through other educational and professional detours in agriculture, it was always with the single goal of a return to farming.

I come from multiple generations of farmers- as far as anyone can trace on my father’s side. Influences and inspirations start with my father and grandfather, from whom I inherited the passion and being of farming. They also nurtured my training growing up on the family farm. My mother was instrumental in installing an appreciation for the business of farming and the organization and administrative aspects that make it work, as well as the value and necessity of gender equity and teamwork in a farm business.

While struggling to establish a farm in Indiana, I came to believe that there had to be a better way. I had experience and education in a farming style that has come to be mislabeled “conventional.” More appropriately, this type of farming may be understood as industrial, chemical, input-dependent and/or low-value. This type of farming offered no opportunity for me, and even less to anyone today. Trained as an agricultural economist, one goal was to find a way to add value to farm crops. At the same time, I was disillusioned by the increasing cost and diminishing effectiveness of fertilizers and chemicals used in crop farming. Ridge tillage offered a proven system to immediately reduce the volume of these inputs, while maintaining or improving production. Then, while attending a Ridge-till conference, I was introduced to Organic farming. Remarkably, I had grown up on a farm, obtained a degree in Farm Management and was a practicing crop farmer… But, had never heard of Organic food or farming! Despite this ignorance, I was immediately attracted. Many of the ridge-till farmers indicated that once they learned to reduce the use of herbicides, it was an easy step to eliminate them entirely AND obtain significantly higher prices by marketing their crops as “organic.” This was exactly what I had been looking for! I was hooked and began to re-educate myself to become an organic farmer. That was 1992. I spent most of the next two decades immersed in learning everything I could about organic farming, certification and marketing. The learning continues to this day, even as I am part of the Vilicus Farms team.

Farming is the most important activity that anyone can engage in. Farming, done properly, is the art of stewardship in action- producing food while emulating nature and improving the natural resources upon which we all depend. Farming is also the only practical way to address and reverse the greatest challenge of our time- Man-made Climate Change. Climate change threatens to make earth uninhabitable for humans and many other species. If we are to reverse and mitigate the damage mankind has caused, agriculture must lead. So, I am passionate about improving stewardship by practicing a sane version of agriculture; offering guidance to others who share our vision and incubating their careers in farming; and, helping to save the planet and our species in the process.